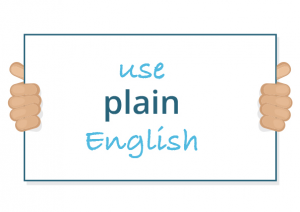 You have something to say? So, why confuse, annoy or alienate? Decide exactly what you want to communicate. Speak and write clearly, using plain English, so that everyone can easily understand.

To communicate clearly, know your readers; know your audience. In other words, put yourself in their shoes and choose your words carefully. Be direct and speak plainly with words they can grasp. If they cannot understand you, why should they listen to you?

Use words appropriately  — simple, everyday words. Avoid complex ones. Call a spade a spade, not a “digging implement”, and certainly not an “excavation solution”. 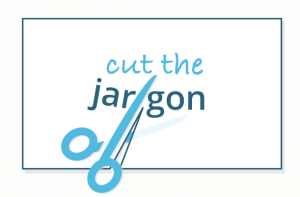 If you can take advantage of a popular expression to illustrate a point, do it. Make your sentences easy. Don’t use jargon. If you’re forced to use a technical term, explain what it means.

Remember any fool can make an idea sound complicated; it takes rigorous and careful thought to keep it simple.

Plain English is direct and concise. Furthermore, it creates a better impression on the reader or listener. And so, you and your project will appear friendly and helpful.

Look out for new words and interesting phrases. Put colour into your conversation. It’s exciting to learn and remember new vocabulary.

However, use words that are familiar to you and your audience. Trying to use vocabulary that you’re uncomfortable with could lead to some embarrassing mistakes. Furthermore, if you are using very complicated language, your audience might not understand you.

Read books and increase your vocabulary to help you communicate clearly.

Hints to help you communicate clearly 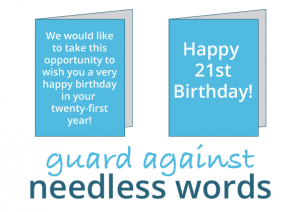 Be on the guard against needless words. That’s to say, be succinct. Discard redundant words. “Our Company is facing up to the threat of being closed” can be simplified to read “Our Company faces closure.”

Avoid linking two words with the same meaning when one will do the job.  So, do you really need to speak of “component parts”?  “Free gifts”? Aren’t all gifts free? Watch out for anything that is “exactly the same”.

Don’t be negative. Leave your audience with a clear picture of what you want to say. See how the word ‘not’ gives the very message you want to avoid. Tell your children “not” to cross the road, and what do they do? Why give them ideas you never intended them to have? 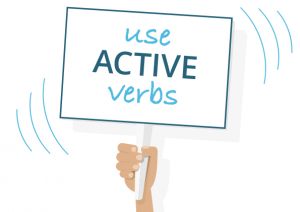 Use active verbs, rather than passive ones. In the active voice, the focus is on the subject, who performs the action of the verb. “The Council will meet next Thursday” is more lively and to the point than the weaker and stuffy passive voice, “A meeting will be held by the Council next Thursday”.

However, on occasions the passive voice has its uses. For instance, it can soften your message. It’s more tactful to say, “Your bill hasn’t been paid” rather than “You haven’t paid your bill.

Concrete words represent objects that we can see, hear, taste, smell, or touch. Words like house, car, horse, and tree are all examples of concrete words.  It’s easy to grasp an idea if it’s tangible and you can picture it in your mind.

Avoid abstract words when you can.  That’s because they tend to be vague.  Abstract words communicate important thoughts in our speech and writing, but they can be tricky because they have many meanings.  They may convey different things to different people and in different contexts.

Take the word ‘bad’ for instance. Someone tells you that the food is bad.  It could mean it isn’t very tasty, could endanger your health or is decomposed. Why not be more specific? Use concrete words and admit the food is tasteless, germ-ridden, or rotten. 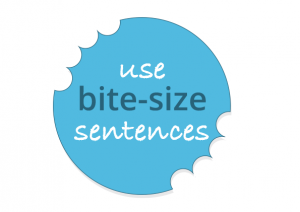 In general keep your sentences simple and short. Avoid too many sub clauses. Long-winded and complicated sentences can easily be misunderstood. So, try to use no more than twenty words in each. “Good writers should aim to be punchy.” Or, to be more concise, “Be punchy.”

Beware of making nouns into verbs or vice versa. Has Jack Smith ‘authored’ a book? No, Jack ‘wrote’ a book.  Or, was Rachel Jones ‘guested’ to speak at the Climate Change Conference?  No,  Rachel was ‘invited’ to give a speech.

Such Americanisms are becoming more common in English usage. Some are more welcome. I think we must thank the Americans for introducing words like ‘babysitter’ and ‘teenager’.  The Peanuts cartoonist, Charles Schultz, popularised and may have coined the words “security blanket”.

Most of our English words originate from the early Anglo-Saxon settlers.  Later the Normans brought us their Latin-based language in 1066.  Thanks to our invaders, we often have two words with exactly the same meaning.  While Latin words tend to be long and cumbersome, Anglo-Saxon words are short and concise.   For instance, to ‘perambulate’ is to ‘walk’.  Why not go for the snappy option?

So remember, it’s ‘£5 a head’, not ‘per capita’ – unless, of course, your sole aim is to demonstrate you’re a person of ‘pretension, virtuosity and verbosity’. Oh dear, three more clumsy Latin nouns!

Be factual. Use the indicative mood, that is verbs which express a statement of fact.  For instance, ‘He’s the richest man in town’.

Try to avoid the vaguer subjunctive mood. This expresses ideas that are imagined, wished or possible and include a suggestion, command, or condition that may be contrary to fact.  ‘If I were a rich man …’ is subjunctive. 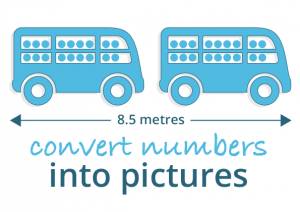 Try to make numbers easy to visualise. Round off figures. 198 is nearly 200.  Also, you can convert numbers to pictures. For instance, 8.5 metres is the length of two buses.  Or, an audience of 112 – enough people to fill two double-decker busses.

By the way, “three times greater than” is the same as “four times as great as”. Yes, really! Know what you are saying.

Be specific and particularise if you possibly can.  For instance, you don’t generalise about American people simply based on your two-day stopover in Chicago.

Try to avoid generalising.  Of course, there are times when you can’t, as I have on this page.  All the rules I’ve listed are generalisations.  But for each I have added specific examples or images to make the rule easier to understand.  As such, they become more meaningful.  Good examples illustrate and make clear what you are saying. 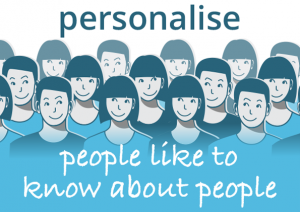 People like to know about people. So, if you can make your point from a human interest angle, it’s more likely to be read. Your own experiences can add authenticity and authority.

You can often make a big story bigger by giving it a human face.  For instance, the politician advocating a policy may be more interesting than the policy itself.

Journalists know the value of a good story.  That’s because it has a momentum of its own and you can simply state what happened in its chronological order.  Look for one that illustrates the point that you want to make. Illustrate rather than explain. A good story connects you with your audience.  You can use your story to inspire or persuade.

Take time to read some of the classical story tellers.  Among them is Dorothy L Sayers, famous for creating the aristocratic sleuth, Lord Peter Wimsey.  You can find more about her in my series on outstanding men and women in the history of East Anglia.

As with concrete words, good imagery evokes the five senses.  Construct your sentence to stir up these senses in your reader’s mind.

Put another way, the songwriter Dixon DeVore said: “Paint pictures with your words. And never, never, put down the brush.” 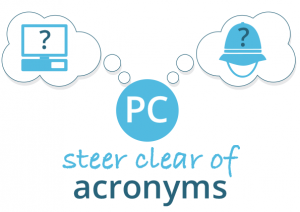 Acronyms are a shorthand that uses the first letter of each word in a phrase or series of words.  For instance, ATM stands for Automatic Teller Machine.

But, acronyms can confuse.  Is a PC a personal computer or a police constable?  Does AA stand for Automobile Association or Alcoholics Anonymous?

So, to avoid confusion, explain and spell out the full wording in your first reference.  Then, use its short form thereafter.

Overused phrases, such as “at the end of the day”, have long since lost their usefulness and have become weak and meaningless.  They add nothing to the message you are trying to convey and are simply padding.  Moreover, they betray a lack of original thought. So, get rid of any worn-out ideas.

Of course, clichés were not always clichés. Once upon a time, they were each fresh thoughts. So, like those writers of yesteryear, spend a few minutes to think creatively and  come up with your own unique phrases.

Remember, it’s not “rocket science”.  When you write “avoid clichés like the plague”.  Oh! I’ve done it again. These persistent clichés can creep in almost unnoticed. So, be on the look out.

Weasel words or phrases are placed at the start of a statement to make it sound more truthful or meaningful. But this fails because the words lack the reliable evidence to back it up. 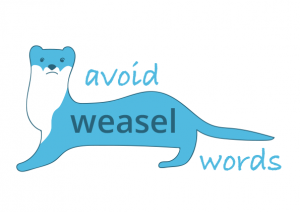 Sentences which begin “Experts believe…” or “Research shows …” may appear authoritative at the first glance. However, at best, these phrases are ambiguous and vague. At worst, they’re intended to mislead.

Weasel words betray lazy thinking. In today’s data-driven society, you need to be more precise.  For instance, “Many people believe the world is flat.” But who are they? And precisely how many people say so?

To be truly persuasive, name a specific person or source to whom the statement or opinion can be attributed. Then, your readers can make up their own minds. Fortunately, weasel words are easy to spot.

And remember, keep it simple

Keep these tips in mind and you’ll communicate clearly.  Furthermore, you’ll stand a better chance of being understood and your message will be easily remembered.

Take a look at some of my other articles. For example, I’ve written a definitive essay on news values for journalists.  This gives you more ideas on how to reach your audience and help you to communicate clearly.

…get someone to proofread your work. You may have sweated blood researching the content of your work. But you may be too close to what you’ve written to spot your own gobbledegook or long-windedness.

Don’t get too emotionally attached to it.  Be prepared to hand it over for editing before it reaches your readers.

If you have a few minutes, read this article again and let me know how you could improve it. I’m still learning too!