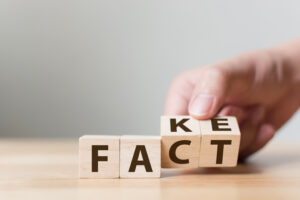 Few people used the phrase Fake News before 2016.  But, contemporary social media platforms are rich ground for the spread of misinformation. The rise of these online platforms has meant misleading information can go viral

Fake News has regularly appeared in the headlines.  Many people see it as one of the greatest threats to Western democracy and free debate.

Fake news becomes all the more dangerous as the world confronts the challenges of the Coronavirus virus (COVID-19) pandemic. As a result, the need to identify fake news has become all the more urgent.

This article can assist journalists and members of the public alike to distinguish between reliable information and fake news. It also explains why fake news is such a problem and gives some useful information on how to identify fake news and disinformation.

What is fake news?

Put simply, fake news is a lie.  It’s deceptive and deliberate. It refers to events that never occurred, or it uses quotes that were never said.  So, a story about Barack Obama supposedly “admitting” that he is a “secret Muslim” is fake news – he never said it. It’s a false quote, it’s made up, and it did not happen.

In its purest form, fake news is completely made-up, manipulated to resemble reliable journalism and attract maximum attention and, with it, advertising revenue.

However, the term “fake news” is being more widely, and often wrongly, used to cover all kinds of inaccurate material, some of which is not deliberately faked.  Indeed, fake news has become a catch-all term to discredit all kinds of stories, true or false. So, let’s first be clear as to what fake news is and what it is not. 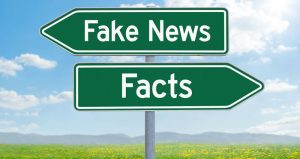 The fact-checking website PolitiFact has come up with a more colourful definition: “Fake news is made-up stuff, masterfully manipulated to look like credible journalistic reports that are easily spread online to large audiences willing to believe the fictions and spread the word.”

What fake news is not

Although such journalism may be misleading in one way or another, fake news is distinctly different. It is deliberately made-up.

Why fake news is a problem

The proliferation of fake news stories has become an increasingly serious problem. Even so, the deliberate fabrication of news to fool or entertain is nothing new.

What differs today is that most people get their news from social media sites, rather than television or newspapers. Fake news travels rapidly on social networks and originates from a variety of sources.  These include pranksters, foreign governments and enterprising individuals hoping to receive advertising revenue by driving traffic to their websites.

Because it exaggerates and sensationalises, fake news readily attracts an audience.  Although the story may be inaccurate and untrue, it can appear newsworthy and easily stimulate interest.  So, as you would expect, it could score highly on a checklist of news values.

The internet, in particular social media, has fuelled the spread of all kinds of disinformation.  In today’s brave new world, anyone with a computer can be a publisher with access to the whole worldwide web.  Because of the sheer volume of available information, it becomes increasingly difficult to check out its veracity.

Such is the scale of the problem that the World Economic Forum has defined misinformation as one of the world’s most urgent problems.

Fake news is a problem because it…

How fake news can turn deadly

The Pizzagate conspiracy theory that led to a shoot-out

In Autumn 2016, the personal email account of John Podesta, Hillary Clinton’s Presidential campaign manager, was hacked. As a result, WikiLeaks obtained his emails and subsequently made them public.

A 28-year-old American read these and packed an assault rifle into his car. Then Edgar Welch, a father of two, drove from his North Carolina home to Washington DC, a distance of nearly 500 miles. He walked into one of the restaurants, the Comet Ping Pong pizza shop and fired three shots. He then began to search the premises in the belief that they were running a child sex ring from their back room.

Welsh said he was investigating online claims that one of the Presidential candidates, Hillary Clinton, and her campaign chief were involved in human trafficking.

He had been acting on “fake news”. Fortunately, on this occasion no one was injured, and Welch surrendered to police.

Pizzagate: From rumor, to hashtag, to gunfire in D.C.

Pakistan’s nuclear threat against Israel in response to fake news

Less than three weeks later another fake news article sparked an even more extreme, and potentially lethal response.  The article included a fabricated quote attributed to the Israeli defence minister claiming that Israel had threatened Pakistan with a nuclear attack if it sent ground troops into Syria.  This prompted his Pakistani counterpart to respond by tweeting a thinly-veiled threat towards Israel “reminding” it that Pakistan is a nuclear power that will strike back if attacked.

Mr Khawaja Muhammad Asif’s ominous threat on Twitter, available to the whole world to see, was a response to an article that was completely bogus. The original story appeared on the website AWD news, a site known for peddling outrageous conspiracy theories.

In the last two instances, common sense prevailed.  But, in August 2018, rumours of child abductors spread through Mexico on the private messaging service, WhatsApp.  The rumours, which were fake, had fatal consequences in the small town of Acatlán.   A mob burned two local men to death , before anyone checked their innocence.

The two men, 21-year-old Ricardo Flores and his uncle Alberto Flores, a 43-year-old farmer had been taken into the police station in connection with a minor incident.

Following rumours on What’sApp that a plague of child kidnappers, involved in organ trafficking, had entered the country, a crowd gathered outside the station.

Despite police saying that there was no evidence the men had committed any crime,  the mob, whipped up in part by local agitators, had a different version of events.

One local resident live-streamed events on Facebook via his phone, while another alerted locals that the police had plans to release the two men.

The crowd wrenched open the narrow gate at the entrance to the police station and dragged out the two men.  As people held their phones aloft to film, the two were pushed to the floor, savagely beaten to death and set on fire.

Burned to death because of a rumour on WhatsApp

The arrival of social media provided a new and highly effective platform for spreading all kinds of information. Internet technologies are optimised to encourage widespread sharing.

Social sites, such as Facebook and Twitter, have made sharing easy. Just about anything can go viral. People begin to believe it and soon the internet is flooded with fake news.

Despite a healthy public scepticism about improbable news stories, social media have added an authenticity to fake news. Facebook is about friends talking to and sharing events with friends.   If your friend shares a story with you, you will be more likely to believe it – because you trust your friends. And so fewer people take the trouble to check out dubious stories.

The reasons why people spread disinformation are many. They include:

Not everyone spreading misinformation does so maliciously. Well-meaning people are also uncritically circulating dubious content.  Whatever their motives the outcome is the same.  Falsehoods create confusion, give rise to widespread mistrust and disempower the public.

The rise of fake news

The explosion of the internet has opened up a plethora of information, but it has also made the news-flow vulnerable to the strong possibility of fraud and abuse.

Social media have left the field open, as never before, to the politically motivated or those who have the financial incentive to peddle fake news. Many online sources of misinformation use techniques to dupe users into thinking their sites are legitimate

The rising tide of this made-up news relies heavily on sensationalism, half-truths and blatant lies. Eye-catching pictures often accompany the text and grab the reader’s attention. The more unlikely a story is, the more likely it will attract attention.

There are hundreds of fake news websites out on the world wide web. They range from those deliberately posing as real-life newspapers to government propaganda sites. They also include those which tread the line between satire and outright disinformation.

However, most people use social media for personal reasons. They may simply enjoy passing on an interesting story, or thought-provoking information, or even indulging in a little harmless gossip. With the increasing use of social media, people who do not read newspapers, or even watch television, resort to its platforms for their news. These sites present real and fictional stories in such a similar way that it can be difficult to tell the two apart.

The problem is not that fake news exists, but that people are too eager to accept and forward it without a second thought. Too many readers believe these stories without troubling to check out their truth. As a result, they allow those who traffic fake news to do their thinking for them.

A reputable journalist will seek out stories that are in the public interest. The fake news writer focuses only on things that engage people’s attention, the outrageous, the sensational, the unthinkable, the incredible.

Such stories will more likely be those one disagrees with – those we hate, or that enrage us. In other words, events and ideas that stir up strong feelings. And before we know what’s what, we’re telling everyone else about it.

Fake stories and their headlines can easily get more attention than real news. When fake news confronts you, think rationally. Use common sense. Fake news writers know how to get your attention. And they have no regard for truth or accuracy.

How to spot fake news

Yes, you’re busy, and rigorous fact checking takes time.  People, bombarded by loads of information, find it impossible to see everything that comes into their news feed, let alone fact-check every item.

So, here are some useful fact-checking sites:

Keep searching for the facts

As Winston Churchill once said: “A lie gets half way around the world before the truth has a chance to get its pants on.”

If people are inundated with inaccurate and untruthful news stories, how can they fully understand the world around them?

Without critical thought, people perceive reliable journalism as being no better than made-up stories. When people fail to distinguish between the two, it becomes an easy descent into a cynical way of thinking that nothing can be relied upon and everything is false, and that’s okay.

The forerunners of fake news

Fake news has its roots in history. Misinformation, lies and deceit have been around since humankind could speak.

Writing fictional stories that play on people’s fears and constructing outlandish conspiracy theories is not new. Nor is it illegal.  Governments and powerful individuals have used propaganda as a weapon to quash dissidence and boost their reputation for millennia.

Instances of bending the truth for political or economic gain stretch back to ancient times.  There are many examples in the ancient Roman civilisation.  Octavian famously used disinformation to further his victory over Marc Anthony in the final war of the Roman Republic.

Take a look at some of my other articles. I have written a definitive essay on news values for journalists, which outlines the criteria of a good news story.  This gives you more ideas on how to reach your audience and help you to communicate clearly.