Five Ws and One H 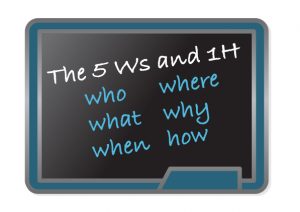 They are the Five Ws and One H:

who, what, when, where why and how

When preparing for an interview or writing factual news stories, journalists, for instance, must consider these six key questions.  Once all these are answered, there should be enough facts to put together a news story.   Failing to answer any of these questions leaves a hole in the story.

Sometimes they are simply called the Six Ws.  (Okay, ‘how’ ends, rather than starts, with a W, but that’s near enough for us journos.)

None of these six key questions can be answered with a simple “yes” or “no”.  They demand a fuller and thoughtful answer.

These six questions are the most used interrogative words.  But, there are others, for instance: ‘whom’, ‘whose’, ‘whoever’, ‘whatever’, ‘whenever’ and ‘wherever’.  Adding the suffix –ever to one of the five Ws gives more emphasis or shows surprise. For instance, “Whatever did you say?”

These interrogative words are essential tools for all kinds of written projects.  For instance:

Historians believe it was the Greek philosopher Aristotle who first identified these key questions. However, two centuries later, an ancient Greek orator and teacher, developed them still further.  Hernagoras of Temnos divided his topics into “seven circumstances”.  These were  who, what, when, where, why, in what way, and by what means.

This in turn evolved into the ‘Five Ws and One H’ which people use widely today.

Short story writer and author of The Jungle Book, Rudyard Kipling, immortalised these six key questions in a short poem.  He calls them his “six honest serving-men”. The poem accompanies the tale of The Elephant’s Child in his Just So Stories:

I keep six honest serving-men
They taught me all I knew;
Their names are What and Why and When
And How and Where and Who.

These six honest serving men served Kipling well when he started his writing as a journalist.

When judging if a story is of interest, journalists refer to a broadly agreed set of criteria called news values. These values enable them to spot a newsworthy story.

You may find the Introduction and What is News? sections on my news values page of interest.  These sections may help you identify the kinds of news stories a busy news editor will be looking for.

I Keep six honest serving-men
They taught me all I knew;
Their names are What and Why and When
And How and Where and Who.
I send them over land and sea,
I send them east and west;
But after they have worked for me,
I give them all a rest.

I let them rest from nine till five,
For I am busy then,
As well as breakfast, lunch, and tea,
For they are hungry men.
But different folk have different views;
I know a person small—
She keeps ten million serving-men,
Who get no rest at all!

She sends’em abroad on her own affairs,
From the second she opens her eyes—
One million Hows, two million Wheres,
And seven million Whys!

From The Elephant’s Child.